Predominately data science projects deal with descriptive statistics. The common theme (especially on this blog) is to gather a dataset, visualize and describe it. The toolset consists of a combination of machine learning, descriptive statistics and (gg-)plots. This time I want to go a step further; from descriptive to prescriptive analytics. The goal is to optimize a fantasy football team. To be more precise the task at hand is to select a set of players while keeping within the budget (e.g. a typical knapsack problem). For that I first gathered some fantasy football data from comunio.de 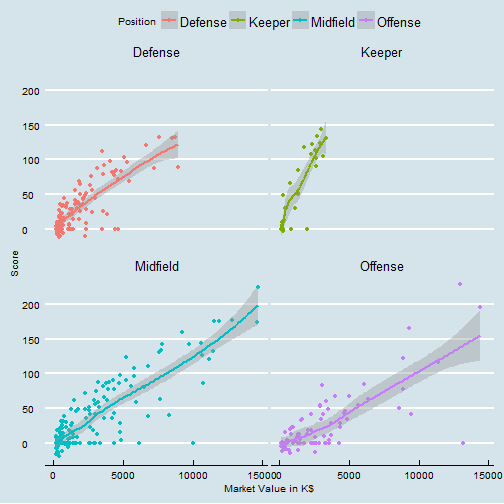 The plot above nicely illustrates the data. It basically contains of a list of players (488) which hold one of four positions and are characterized by two basic variables; (a) the market value, - for how much a player can be bought on the fantasy market, and (b) the Score which indicates how well a player has performed.

A simple optimization problem is to figure out how to maximize the number of points while keeping within the team budget. There are two more constraints on the line-up, each team needs to have exactly one keeper and a dynamic number of players on the defense, midfield and offensive positions. As players might be injured during the season, let’s simplify the line-up constraints and the maximum for each position is 1 keeper, 5 defender, 5 midfielder and 3 scorer. Additionally, in total a team consists of exactly 13 players.

How can we setup this optimization problem in R? In contrast to most formal definitions, I will start defining the solution backwards.

First, let’s define the objective; it is to maximize team score. The decision is which player to pick to maximize the score. Hence the decision variables (x1 - x488) are binary and are multiplied with the individual player score. The “simple” dataframe contains all players with their market value, score and position. In order to setup the objective vector I simply take the “Score” vector. Then I define the right-hand side of the constraints using two vectors. It is important that the positions align (e.g. the 1 refers to the keeper position which should equal.)

Next I need to setup the left-hand side accordingly. In order to keep the right order (matching the left hand side), I start with the market value of each player. The sum over the decision variables times the individual market value should be lower than 20 Million. Than I define a player vector set to 1 equal to the size of the dataframe.

Finally, for the left-hand side, I need to take into consideration the position each player holds. A nice function allows to one-hot encode the dummy “Position” variable in a suitable matrix.

That brings us to the nice part: solving the linear program using lpsolve. The solution represents the decision variables, indicating which of the player should be bought. Applying that back to the dataframe, I get the optimal score, market value and the name of players to be bought.

That’s it. Instead of just describing the dataset and figuring out which players performed well according to some metric, I used just ~40 lines of code to get the optimal result while keeping within the constraints. On a general note; while these problems are pretty common in various industries, the problem class and solution is vastly undervalued by data scientists and online courses.